Dog owners, you could be liable.

What seems to be a recent increase in dog attacks has prompted me to ponder whether some of you might not be aware that you are personally liable for the actions of your dog.

It should be enough for most people that their dog is an animal, is unpredictable (even if you think you “know” them really well, they are still capable of snapping), and that the animal might injure or severely injury a person, child or other animal. If its intended victim is a small child or small dog, they may even cause that child or dog to require surgery or may even kill it  during the attack.

If this is the case, not only will you be liable in civil law if you are found negligent and liable to pay not only an amount of compensation to the victim (ie if your dog was for instance, sitting in your window unsupervised and your yard is not a fenced yard). You will also be liable to pay for hospital and veterinarian expenses to the other party, both of which are very pricey. 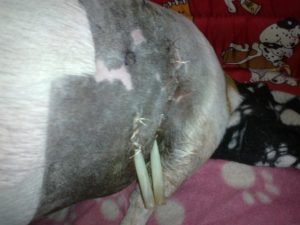 If that’s not enough for you, you may also be convicted of an offence under the Companion Animals Act:

Under the Companion Animals Act:

·         The owner can be prosecuted even if not present when the incident occurred.

·         The penalty increases to four times the normal amount, a whopping $44,000 in the case of a menacing, dangerous or restricted dog.

·         The court can disqualify you from owning a dog for a period of time, even if you do not receive a conviction.

The maximum penalty increases to $22,000 and/or 2 years imprisonment where the ‘attack’ resulted from a ‘reckless act or omission’ by the owner, or by a person in charge of the dog.

The maximum penalty in the case of dangerous or restricted dogs is $55,000 and/or 4 years imprisonment.

Restricted or Dangerous dogs include (as per section 55 of the Act):

(d1) any other dog of a breed, kind or description whose importation into Australia is prohibited by or under the Customs Act 1901 of the Commonwealth,

(e) any dog declared by an authorised officer of a council under Division 6 of this Part to be a restricted dog,

(f) any other dog of a breed, kind or description prescribed by the regulations for the purposes of this section.

·         Section 23(1)(a) says that any conviction or finding of guilt means that the owner must be permanently disqualified from owning a dog. This means that the dog will be seized and the owner will not be able to get it back. Your dog may also be destroyed.

16(1A) Attacks by menacing, dangerous or restricted dogs that result from owner’s conduct

The maximum penalty increases to $77,000 if an attack by a dog from the above category is a result of the owner’s failure to comply with the ‘control requirements’ under section 51 or 56 of the Act.

Those requirements include keeping the dog in an approved enclosure unless muzzled and leashed in the case of a dangerous dog, or enclosed in a manner that is sufficient to restrain the dog and prevent a child from accessing it in the case of a menacing dog that is not under the effective control of an adult.

There is a maximum penalty of $22,000 for anyone who ‘sets on or urges a dog’ to attack, bite, harass or chase any person or animal (other than vermin). You may also be disqualified from owning a dog.

The maximum penalty increases to $77,000 and/or 5 years imprisonment where the person encourages a dog from the above category.

Any guilty person must be permanently disqualified from owning a dog.

Still not convinced that you need to control your animal and keep it in its yard or on the leash when out and about? Put yourself in the shoes of the countless victims of these attacks. From elderly people requiring hospital treatment in New Lambton, regular walkers out enjoying their stroll being bitten, small children losing hands, the mother of two out running with her timid collie being attacked for the second time in a matter of a few months and the Jack Russell in the above picture who had major surgery to fight for her life and her owner, myself, who also sustained bites. Enclose your yard. Control your dogs. You could face very harsh penalties and a lifetime of feelings of remorse if you don’t.

Were you abused when you were at school or when you were in care as a foster child. Or were you injured when in the care and supervision of a school. If so you may have a right to compensation.

Were you abused when you were at school or when you were in care as a foster child.  Or were you injured when in the care and supervision of a school.  If so you may have a right to compensation. The Department of Education in each State, as wel...